Now that Doctor Reid has given a lecture to Muslims on how to bring up their kids properly UK airports are a lot safer.

This means that the following items are now allowed on board aircraft as hand luggage:

Welcome on board Mr Capone!

If you would like to purchase the specially padded violin case, please click on the image. A full range of firearms are also available.

Please note that because of the likelihood that passengers will still be tempted to construct deadly toothpaste bombs in the aircraft toilets the following item remains banned:

Hugo Chávez, the President of Venezula, had a nasty experience at the General Assembly of the UN on Wednesday. He went along, only to find there was a very strong smell of sulphur.

The Daily (Maybe) is on a mission to seek out the top 100 Green Blogs in the UK. The current list looks something like this. If you spot another one, please drop a line to Jim at his blog. 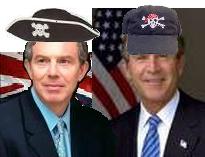 It's quite good idea if your heroes are also ordinary people. It means that if you want to speak to them some time, you can just stop them and ask them what they think or feel about a particular subject, and they will reply to you in simple terms which you can understand. Lobster Blogster has spoken a couple of times to Brian Haw for instance. He's the man who has stood outside the House of Commons for the past five years because he believes that bombing Iraq is wrong. Speaking to Brian can be a challenge, however, because you cannot come away without feeling his burning anger at the need for him to stand there. He doesn't want to be there, but he has too stay, because he thinks the truth should be heard.

So it was with great pleasure that Lobster Blogster had the chance to speak briefly to someone last night who is also helping that truth to be heard. Craig Murray was Britain's ambassador to Uzbekistan from 2002 to 2004. Craig has gone through quite a journey since that time. During the build up to the American and British invasion of Iraq he became aware that Britain was relying upon fabricated intelligence which was obtained through torture. He felt that this was wrong in the moral sense, and wrong again in the operational sense. Following a campaign by the Foreign Office first to discredit him and then to silence him, he came to realise that Britain's foreign policy was being dominated by a cynical aggressive and dangerous policy originating from Washington.

There is a grassroots movement in Britain which is growing. It needs people who can tell the difference between right and wrong, and who are prepared to speak the truth. Ordinary people I suppose. Brian Haw is motivated by Christian beliefs, Craig Murray by a sense of duty and a personal empathy with the victims and family of terrible state crimes.

We can all do it in different ways. Craig has the ability to speak about the victims of torture whilst retaining his composure and using wit and charm. Whether you are interested in travel, the truth behind the war on terror, or even the personal journey of a man who has fallen from grace as an ambassador but who has reinvented himself as a peace activist, his book is a good read.

There is a large demonstration taking place in Manchester on Saturday. Please try to get there if you can.