Lobster Blogster usually wanders around the internet to see if there are any scraps that others might have forgotten. Occasionally he ends up in deep water. Now he stands accused of heinous crimes for his trouble.

Stephen Pollard believes the lobster is deliberately distorting his words over at his eponymous blog. From a lobsterly point of view it appears that the understated journalist applies labels to various groups, then knocks them for it. There must be a name for this particular type of sophistry, but it escapes the lobster for the time being.

Closer to home, a human by the name of Iain Sharpe claims the lobster has falsely accused him of censorship. His blog hadn't been receiving comments for months, and so it was a stray comment by the lobster elsewhere that caused the poor fellow to feign such offence. In reality I expect he was just embarrassed to have his error highlighted by an aquatic creature.

So marine blogging fans, you see it does help when blogging to have a very hard shell. Please let the Red Cross know I'm behind bars, and send a food parcel if you can.

Tony Blair Chased Across a Field by a Giant Squid 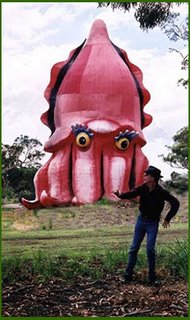 It's "open season" on Tony Blair at the moment, so Lobster Blogster thought he would join in with this aquatic observation.