Apologies to any reader who used a Lobster Blogster Travel News item on 21 August when packing for a departure from a UK airport. Unfortunately we relied upon an announcement by Alistair Darling that he hoped he could "make sure that the system is manageable, and proportionate."

Airline security remains at the Insane level, and will remain so for the conceivable future.

Has the Guardian become infected by lobsterly thoughts? After all it was less than two weeks ago that the lobster said "Is it possible that ... the government might be wrong about what pushes people to criminality?"

In fact David Clark at the Guardian goes somewhat further than the lobster by suggesting "only 1% accept the government's assurance that [our foreign policy] has made us safer... There are probably more people in Britain who believe in Santa Claus or yogic flying."

Pictured right is a member of the Natural Law Party who Lobster Blogster feels sure would be willing and able to help the government formulate a new and more popular foreign policy. We'll have to wait for Christmas if we are going to ask Santa Claus.

Three uses of the term Agent Provocateur for you to consider.

Derek Pringle's article in the Telegraph, which was widely quoted in the worldwide sports press, claims Duncan Fletcher acted as an agent provocateur in the Pakistan cricket ball tampering incident.

Detective Sergeant John Pickersgill categorically denies he was acting as an agent provocateur in an incident photographed in Parliament Square. Det Sgt Pickersgill was attached to S012, the Special Branch Section at New Scotland Yard responsible for holding intelligence on extremist bodies.

Kerron Cross demonstrates the correct usage in a jokey article about Tony Blair on his blog.

An occassional series on the joy of heraldic art from the perspective of a council waste operative. 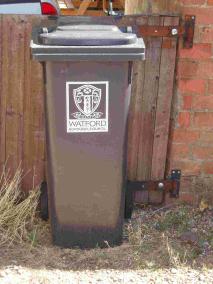 Heraldry is the practice of designing, displaying, describing and recording coats of arms and badges, as well as the formal ceremonies and laws that regulate the use and inheritance of arms. The origins of heraldry lie in the need to distinguish participants in battles or jousts, whose faces were hidden by steel helmets. (from Wikipedia)

In the modern world there is no finer "Knight of the Road" than the dual purpose waste and recycling collection vehicle. The joust has now been superceded by the weekly rubbish and recycling collections, as two over-sized vehicles battle to reverse down your road. This is why municipal authorities choose to adorn their general purpose domestic waste recepticles with the ancient symbols from heraldry.

One the left you will find a full length shot of a wheelie bin, proudly displaying the coat of arms of Watford.

To the right you will see the design in fine detail. The coat of arms of Watford is described thus: 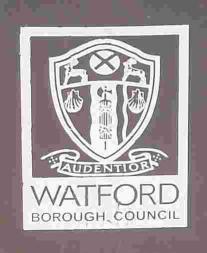 An ancient shield design, displayed above the Latin motto "Audentior", surronded by a white rectangle bearing the imprint "Watford Borough Council" in capitals at the base, all colour and some detail lost as the entire design is impressed in white onto a gray high density polyethylene wheelie bin shell using a heat stamping method.

Note 1: Audentior translates as "if you've got bad taste, don't be afraid to show it."

Note 2: Wheelie bins with heraldic emblems are a real improvement to the town, credit where credit's due.

Mr Bob Piper wanted me to tackle this, so I had better look lively. It's a meme of three :o)


1 Things that scare me

2 People who make me laugh

Paul Merton
Ronnie Barker
Arthur Lowe
(Two of these are dead - is that a problem?)

3 Things I hate the most

Cauliflower
Things that could work well, but don't
Mendacity

6 Things I want to do before I die

7 Things I can do

8 Ways to describe my personality

Walk away
Play a musical instrument
Get up in the mornings

10 Things I think you should listen to

11 Things you should never listen to

Compassion
How to sing
How to use an abacus

15 Shows I watched as a kid

According to the Home Secretary Doctor Reid the police have uncovered "substantial material" which would allow them to take forward the judicial process in the current terror plots case.

Lobster Blogster wondered whether the police may have substantial material with respect to the individual below. His story, or at least as much as is known, can be found by clicking the image.

Good news for travellers from the UK as luggage restrictions at UK airports are going to be downgraded from "Insane" to "Manageable" within days.

The "Insane" level was brought in as a temporary step, as a way of easing down from the "Chaos" level.