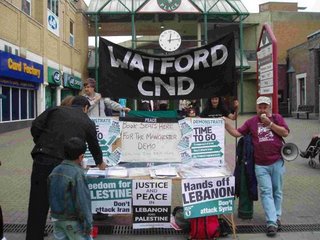 The lobster was planning to do a big exposé of Labour MP and junior member of the government, Claire Ward, this week, but its had to be put on hold.

This is because the Voice of the Delectable Left Kerron Cross, Labour councillor and research assistant to a Labour MP, seems to be having a bit of a "love-in" with lobster just at the moment, and it would be a shame to lose a blogging friend over it.

There is another reason, which is Lobster Blogster keeps putting off writing another dull letter to Ms Ward, this time to query what she has previously written with respect to no member of the government ever having signed something called an EDM. Actually it's not so much that the lobster's letter would be dull, it's the reply he's likely to get. The last time I wrote, mentioning that this rather fine stall would be on display at Watford High Street, the lobster got a four page reply with a very wonky history and analysis of the current situation in the Middle East. In summary, she wants a lasting peace, so it's fine for the two sides to bomb the shit out each other in the meantime.

Thankfully, some kind of ceasefire has come about now. To keep the peace with Kerron I'll hold fire on Ms Ward too. Well just for a little bit, anyway :o)


PS Just admiring this post when I noticed that my "Terror Level" indicator seems to have changed again. I put it up as a bit of joke, and never saw it change so I always thought it wouldn't. Apparently we are a bit safer now and the current level is Ernie/Bert. 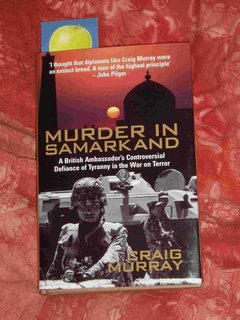 How do you get from:

declaring to Tony Blair there "is a very comfortable cell for you at the International War Crimes Tribunal at the Hague"?

Perhaps the answer is to be found in Murder in Samarkand, Craig Murray's highly readable, very disturbing and entirely personal defiance of the War on Terror.

UPDATE: got the quotation a bit wrong so I've fixed it.

I'm A Celebrity, Get Me Out Of Here! 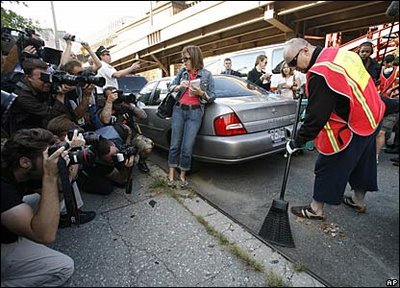 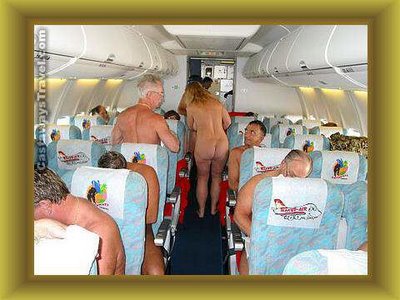 Lobster thinking
If you believe the government then there is no link between foreign policy and domestic incidents. If you believe the police there is a link between domestic incidents and racial or religious tension. The government believes its foreign policies are being calmly accepted by all groups across the world. The police believe UK residents can be incited to criminality by the recent security threat. Foreigners, it would seem, are sane and rational people who never react in anger or hatred, yet here in Britain that we have citizens who can be whipped up into a frenzy by the alleged actions of a few.

To a lobster humans all seem much as one. Is it possible that either the police or the government might be wrong about what pushes people to criminality? Could one or the other perhaps have a motive for wanting to distort the truth? The lobster would never dream of interfering in human affairs, so he'll leave that for you judge.