At last Lobster Blogster is able to complete the international greetings, so that bloggers the world over are able to converse freely in all the human tongues. It's also quite amazing to consider how many different cultures are picking up on the fact that Aussies are being taught a bit of lesson on how to play cricket at the moment. Many thanks to a kindly gentleman known as Ed who supplied the following:

The wok-loving human known as Dan now reports that a successful expedition was launched from the Bricket Wood area to retrieve his asian cooking utensils. Bloggers around the world can now stand down from further duties with respect to this matter. The reputation of inn-keepers in Nant Peris is intact and so this is truly a good news story in which all can rejoice.

In passing, it's a little known fact that people from Bricket Wood are known as "Boggits". Lobster Blogster wonders if any human bloggers know the origin of this name.

Leading Lib Dem allowances and expenses claimant Councillor Derek Scudder has written to the paper this week to out himself and make the extraordinary claim that he is very important. He says:

In fact, the deputy mayor is me.
The Scudder household is of course one of only four in the Watford area that is entitled to "double bubble" when it comes to the very generous allowances and expenses that can be claimed by Watford councillors. Now that Mr Scudder has cleared up the confusion, he will be able to make a full claim from the Watford council tax-payer.

Lobster Blogster is at this very moment scrabbling through back-numbers of the Watford Observer, in the hope of uncovering how much he has been claiming. Unfortunately Derek forgot to include the exact figures in his letter.

Tagged by Pal and GW

1. Number of books I have owned:

Millions? Probably not. A lot I suppose. Funny how you can never get rid of them. Having a load of books hanging around is a good way to look brainy.

The Dream by Emile Zola is as yet unread. Also bought The Daily Mail Sodoku Collection as a gift for a man who sits outside a building called Plantation Place in Fenchurch Street. Must check if the security guard ever passed it on to him.

Yikes, this question is too hard. I usually read about five different books at a time and almost never get to the end before starting another one. Bill Bryson's a Short History of Almost Everything springs to mind as one I did finish, but I have no idea if the title is correct or not.

Too hard again. I have one on Walking Meditation which is very good because it is very short. I'm getting a bit fed up with this whole list thing now. Is it some sort of American thing? I find the whole idea a bit alien and dreary.

No, no too much! Ok I am a wet blanket. I couldn't inflict this sort of death sentence on another blogger. I like books and libraries, but writing within the confines of such a limited form is awful. If you like doing this sort of stuff well just go off and do it anyway ...

Revenge of the Lobster! 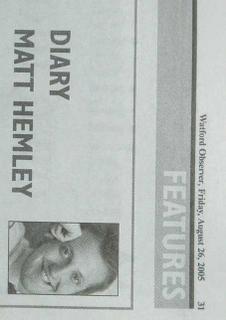 There exists in the human world a very naughty journalist by the name of Matt Hemley. Why naughty? Well he once described the lobster's best hand-writing as "scribbly". Now Mr Hemley, you try holding an ink pen in a claw and writing your best script underwater ...

Here in Watford, the most recent innovation for book fans was the Sunday opening of the library at the top end of town - and news that people may soon be able to enjoy a cuppa while browsing for a novel.

Clearly no one has told Matt that the in-library coffee/tea facilities have been - and gone. Looking something like a spaceship service vehicle, the one a Watford Central library didn't ever seem to have any customers for the few weeks or so it was on site. When it disappeared some four weeks ago, the Lobster enquired of a staff member of its whereabouts. The answer was that none of the library staff ever thought that it would work, and that if library goers wanted to drink fancy coffee they could of course use one of Watford High Street's many cafes and bars.

Matt, you really ought to get out more, to the library!

Nothing much has happened ...

Not too much has been happening in Lobsterland, so Lobster Blogster has been very quiet lately. We will of course keep you posted when something interesting does happen, and bring you the news as soon as possible.

In the meantime, happy blogging :o)