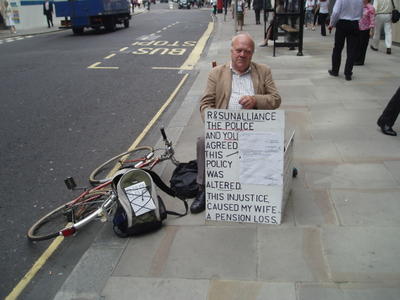 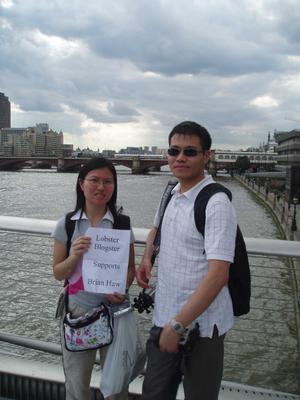 Hong Kong tourists
Love each other
_.-._ 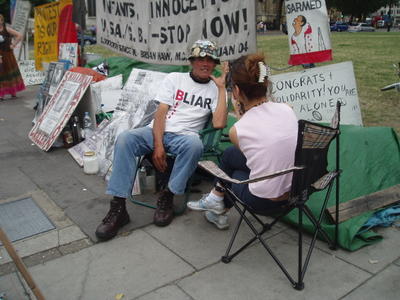 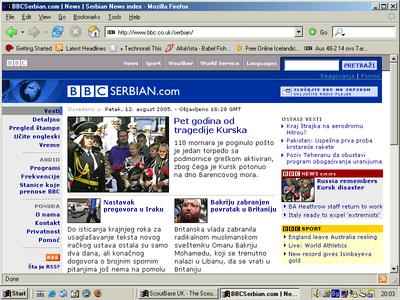 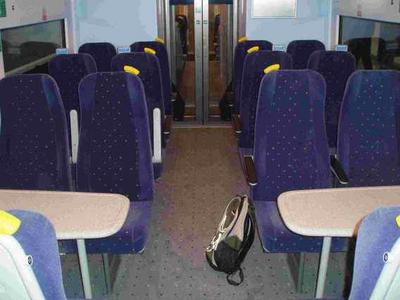 If anyone sees this on the Bricket Wood Express, could they please ring Silverclink security straight away.
Cycles on trains

Can anyone advise the earliest train from the junction which a bicycle is allowed? I need to go and see Mr Law today. 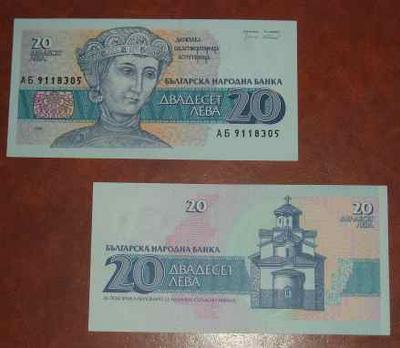 
And a personal favourite of the lobster...

Greetings to many friends at EuroJam which is being held in the Soca valley in beautiful Slovenia this week. Please drop in to Lobster Land if you get the time...

Britain has a Three Party System 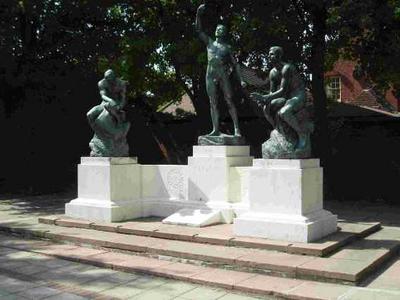 These humans look like fish out of water
# posted by Lobster Blogster @ сряда, август 10, 2005 3 comments


We've been having the most extraodianary

weather in the UK over the last few days. Here's how Britain compares with the rest of the world for rainfall in the last 100 days.

The small pink lobsters are just to help draw the attention of younger viewers onto the chart. I don't expect they are very interested and figures and the like, they have plenty of things like Banana Man sweets, glossy brochures and Honda CR-V 02 's to keep them busy.

Bat walk cancelled - sold out (or Watford Lib Dems have slapped a sticker on it). New plan is to go for a cycle ride. Any suggestions where?

Lobster Blogster is about to cycle from his house to the town hall, and has got his camera with him. If you are a policeman who likes KFC try not to park on the pavement.

New cricket rankings released today indicate that Canada are shooting up the list, mostly thanks to their new lucky leaf flag, which was a gift from all the creatures of the Marine Kingdom.

Australia think that they are the stars, but actually they are almost as rubbish as New Zealand.

Good to see that the Moonies of the Maldives and Korea, Republic of are also in the rankings now.

Salty the jolly lobster says "Hi" to cricket fans the world over. Please keep an eye out for the weather over the next few days.

Alert status has now been raised to amber.

Lobster Blogster is moving house to Westminster today. It's full of grown ups there who believe in free speech. 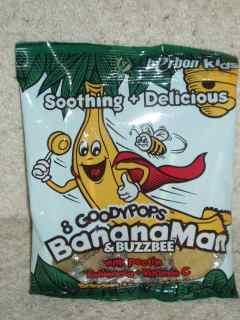 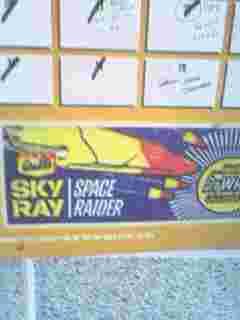 Just arrived direct from Kevin Koala's mobile is a Sky Ray Space Raider. But where is the Dalek Lolly?
# posted by Lobster Blogster @ вторник, август 09, 2005 2 comments

Colleen Becomes Ambassador to the USA

Colleen said...
If you've seen Star Trek Voyager, there's Seven of Nine. Most men think that they are pretty lucky to have the opportunity to look at her!?

No Colleen, most men think they are pretty lucky to look at you, because you are a real cat whereas I am a character from a sci-fi fantasy programme.
Lobster Blogster said...

Your Excellence, you have agreed to live in a beautiful glass castle, and to be driven to meetings with the President in a carriage and four. Your duties are serious because you will be responsible for conveying the good wishes of the entire Undersea World to the American people.

To which Colleen said...

Mr. Lobster, I would be honored! (honoured!) Thank you for asking me!

The official photograph from today's ceremony shows President Bush eyeing up a sandwich whilst trying to throttle Lobster Blogster. Colleen looks as regal as ever. 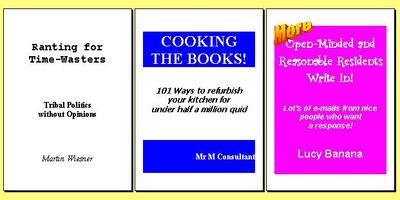 Lobster Blogster is very pleased to welcome today a new visitor from Iceland. I hope you will all give him a very big welcome, even though he doesn't seem to speak a work of English.

The particular Viking invader we are talking about here is Steini Teague and his intriguingly named blog Ráðlagður dagskammtur. As you can see from the flag to the left, Iceland is an entirely forbidding place where visitors are not welcome. Beware of bulls, giant chickens and dragons. There are only men who live there, and they can't afford proper shoes.

Next we remind regular readers that later today we shall have special ceremony to appoint Colleen as Lobster Blogster's US Ambassador. Henceforth all members of the Marine Kingdom will need to refer to Colleen as "Your Excellence."

Colleen has said that she has just enough time in her busy schedule to leave her enormous ice castle, step lightly into her carriage, and go to visit the esteemed Mr George W. Bush for tea and cucumber sandwiches. It is important for aquatic creatures to maintain the peaceful and calm relationship of equals we have managed to establish with the US, otherwise we may find they start dumping agent orange on us, as before.

A little after the Ambassadorial ceremony, Lobster Blogster will be welcoming a new Councillor to Watford Blog Council at the newly returbished Council Chambers. Please remember that you are no longer allowed to bring foodstuffs such as Dalek Lollies, kebabs and bananas into the Council Chamber, at least while the £500,000 carpet is new, anyway. Green bins are supplied for surplus food items.

Peter Williams is to become the said alderman, and a jolly fine one he will make too. Extensive background checks are being done to establish where Peter actually lives, so that we know which ward he will represent, but I'm sure that everything is above board and it will all get sorted out soon. Peter has a great sense of humour and has even self-mockingly describes himself as "Highly opinionated!" But seriously, not too long to wait now Peter, then you can make your first expenses claim...
Other items:

Lobster Blogster's online shop will shortly be selling a range of second hand goods. Chiquita's alter ego should be in at 8.30 sharp to help with any enquiries.

Please be aware that Chiquita is introverted and German, so cannot be expected to understand the finer points of English and American humour (humor).

Dangerous Man on the Run for 400 Years 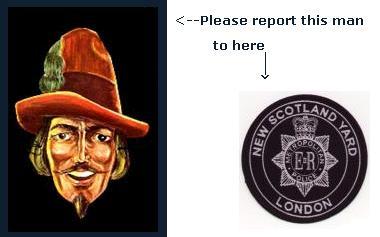 Do not appraoch this man, he is VERY dangerous, and a MENACE to the blogosphere.
Look how he used his rappier wit to thwart the Lobster
Look how he was impolite to the Future Mrs Lobster

The best place to report him is to New Scotland Yard. (ok, I know that he was actually caught 400 years ago and hung drawn and quartered etc. but there does seem to be a look-alike marauding round Westminster.)

Is your journey strictly necessary?

Lobster Blogster has become aware that some members of the blogosphere are having unnecessary journeys using their Weblog Explorer tickets. Please try to keep your journeys to a minimum and avoid unnecessary stops. Its quite a short walk from Farringdon to Barbican say, and St Jame's is quite close to two interchanges. It won't be RIGHT if we all just decided next Tuesday to all jump on at the same station. Please try to keep the costs down for everyone. 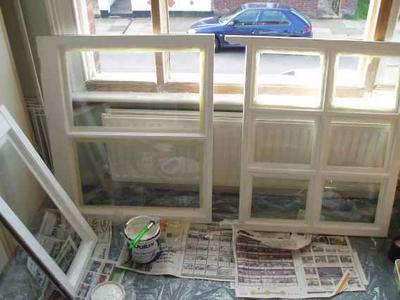