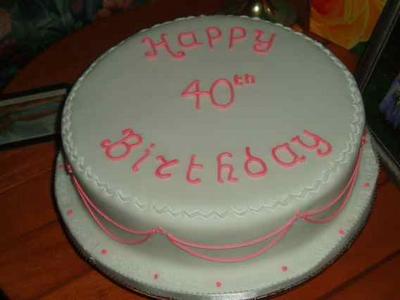 Here's a lovely cake that Christine baked for her birthday. Christine is clearly a good cook, and it tasted as good as it looks - delicious! With a bit of luck, she'll agree to make the wedding cake for Mr and Mrs Lobster :o)

Old lobster law says, be true to yourself, but be kind to creatures you meet on your journey in case you meet them again on the way back... oh, and look after the earth, so you might be lucky enough to come back as a lobster one day.

There are reports coming in of Red Bag Disease in the SW Herts region. Please be vigilant and report any sightings as soon as possible.

Symptoms are:
Don't be fooled. The "No Congestion" condition can quite dangerous, according to the location. Although in the past Lobster Blogster has advocated culling where local conditions suggest, the recent outbreak has occurred in a "hot spot" where great caution is necessary.

At risk:
All of the above are advised to avoid the area whist the Red Bag Disease is being treated. 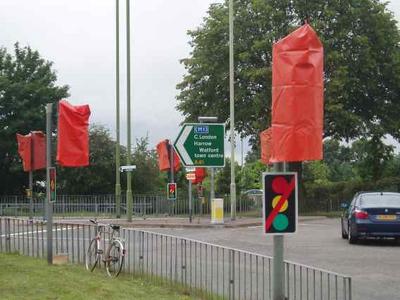 Secret footage of a very short cycle path has been released. Lobster's mother believes it may be the world's shortest. Do not show your friends. (Beware if you have a slow connection - this is 5.2MB for a twenty second clip of very wobbly footage)

While officers are not yet ready to remove all the equipment at Watford Junction, they are considering our suggestion of removing the "bagged heads" to improve overall visibility.

Only people called Andy Wylie, or people who have assumed the name of Andy Wylie may leave comments here.

Lobsters prefer to crawl or swim. But walking is good for humans. In an effort to get more people out of their front doors and walking in the street, park or countryside Lobster Blogster has become involved with a health walking scheme. The idea is very simple, take a brisk walk for thirty minutes a day, five times a week and you will be a better human for it.

Here's a couple of leaflets: 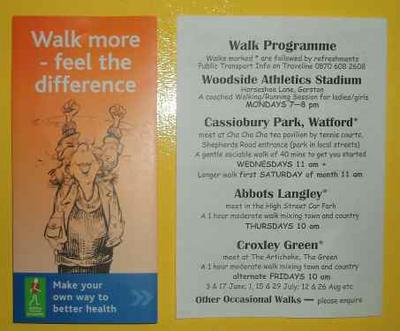 Here's a medal and a badge if you get a bit more adventurous: 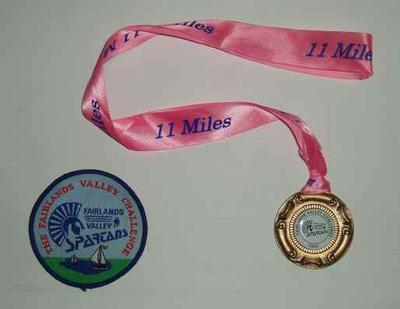 And here's a real prize, a beautiful village sign from Datchworth in Hertfordshire which the lobster spotted whilst out with a group of walkers two weeks ago. Lobster Blogster was carried round in a small knapsack: 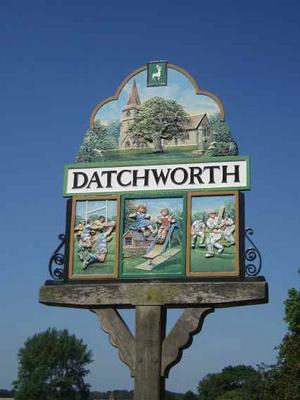 Walk More to Save on Stamps

A group of locally based eco-warriors have announced today that people should "make their own stamps" and "deliver things by hand" in an effort to get people to walk a bit more. Activist "Wild" Ken thinks it would be totally crazy for the Party Vice Chairman to use DHL or ParcelForce to return the books when he only lives around the corner.

An example of a home-made stamp is shown below, but people are being encouraged to make their own.

The Watford Observer (which is about a fine a paper as you will ever come across!) has publicised the idea of getting more humans to swim. Unfortunately, since Watford Council insists on reducing indoor swimming space in Watford, it may have to be in the lake.

Sometimes its difficult for marine creatures and humans to find enough empty space in which to be. Courtesy of Lobster Blogster, here is some empty space for you to enjoy...

Are the Olympics Good for the Economy? 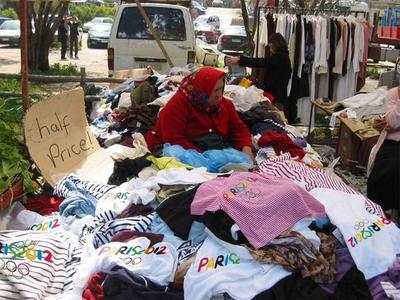 Bonjour, this pictue has been doing the rounds, just in case anyone has missed it.
Lobster Blogster's online shop is open between 8.30 and 5.30 Monday to Saturday
(half day closing Wednesdays)

When Labour ran Watford Council, until 2002, the Audit Commission described it as "one of the worst performing district councils in the country."

Liberal Democrats in Watford claimed on Monday that:

In October 2003 Mayor Dorothy Thornhill and county councillor Stephen Giles-Medhurst, persuaded the County Council to turn the lights off while Transco maintenance works were carried out on St Albans Road. Due to popular demand, the lights have remained off ever since, even after the Transco works were finished.

In his human guise, Lobster Blogster has been campaigning for the same set of lights to removed. The lobster runs a webpage at www.hertfordshire.freeserve.co.uk/TrafficLights/

E-mails between him and the entire County and Borough Councils, the Mayor and a councillor confirm that the lights were actually switched off on 6th May 2004. As does the date stamp on many of the photographs. Lib Dems claims that they persuaded the council to turn off the lights in October 2003 seem a little bizarre, since they hadn't even been built then. The lights which caused so many traffic jams were installed around January 2004 as part of a "Pedestrian Plan".

Lobster Blogster is feeling a bit pious today, so I am just going to say:

As a town, we have to change if we are to prosper. But change has to be managed carefully to preserve the town's heritage and avoid adding too problems such as traffic congestion.

It is important to get the balance right. 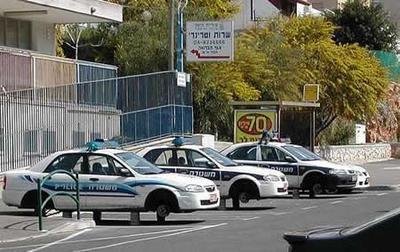 Which is the biggest PITA?

A debate is now raging on Lobster Blogster, which has reached international dimensions.

It all started when

You've got Camilla to deal with. Isn't she a bigger PITA than Americans??

Nogbad went and said...
Nobody in this world or the next is a bigger PITA than your neighbours.

In the interests of fairness, Lobster Blogster is releasing these two images, for you the public to decide. Vote now to help choose who is the biggest PITA 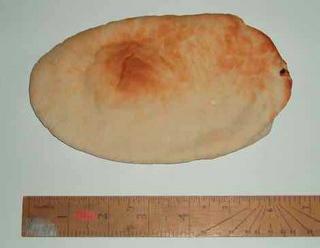 Related items:
See our own Wooden Horse at keeping-safe-in-times-of-heightened-tension

Last American Free Zone in Britain About to Crumble

Reality check
After fixing yesterday's beautiful pictures of land, sea and blogosphere anemones, Lobster Blogster wanted to show you another picture. This time its from the human world. 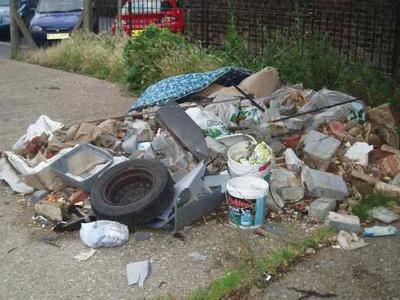 Legal position
The local council where this this scene was photograhed on 26 July 2005 give the following advice: "Environment, Health & Licensing has powers to deal with accumulations on private land that are encouraging rats or mice eg matresses, upholstered furniture and/or food waste". You can read this advice by following the link to www.watford.gov.uk/../keeping-in-touch .

The land on which this rubbish was dumped forms part of an area call the Nascot Conservation Area. Although most this area is to one side of a main line railway, in the Nascot ward, a small part is to the north of the railway, in the Callowland ward. The Callowland side of the conservation area, has been badly neglected by the local council for many years, in favour of its up-market neighbour, the Nascot ward. However the Callowland side was included in the conservation area because it included many historical buildings associated with the London and Birmingham Railway, including the original station building for Watford Junction. A plaque in the Railway Social Club also commemorates the fact that Queen Victoria boarded the first ever Royal Train at this location. You can see a further set of unanotated and somewhat depressing pictures of buildings and sites in the Callowland side at NascotConservationArea. The map shown left is taken from a very large map available at www.watford.gov.uk/../proposals-map .

The Mayor of Watford, Mrs Dorothy Thornhill, visited area on 8th May 2005 and witnessed first-hand the fly-tipped rubbish shown in the first picture. If there are any developments in connection with this big pile of rubbish I will let you know.

According to Ben Fry's work at acg.media.mit.edu there isn't within the blogosphere. Anemones can be found on land (left) and in the sea (right). So that just seems to leave outer space. 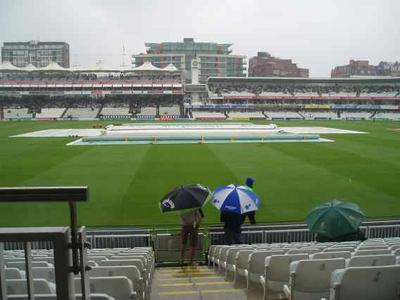 Rain stopped play at Lords yesterday for England fans to gain hope that the game would would be washed out and the game drawn. At 3.45pm the play did begin, England lost the final five wickets of their second innings and the game was won by Australia. 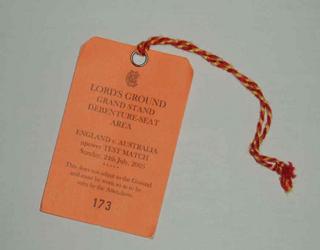